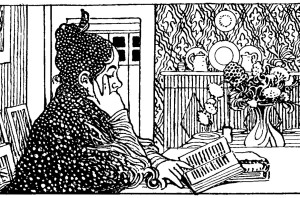 Beginning something new is always a feat, so I’ve decided to start with an easy subject: the best books I’ve read lately. The temptation will be to write too much.

This book was easily the most important one I read in the past year. Thornton traces the development and characteristics of English Spirituality — a spirituality that is grounded in Scripture, holds the affective (emotional) and speculative (intellectual) side-by-side in dynamic balance, and manifests the Benedictine three-fold rule of prayer (Holy Communion, the daily office, and private devotion). This book gave me a framework for a healthy asceticism in these early years with children (because of the emphasis that prayer with the church — i.e. the daily office — comes before personal devotion. Therefore, to me this means I don’t need to escape from my children in order to pray.)

Company of Voices: Daily Prayer and the People of God by George Guiver

After I read English Spirituality, I wanted to understand more about the history and development of the daily office. This book was incredibly helpful. In the first several chapters, Guiver roots the daily office in the basic realities of being human (I immediately knew I needed this book when I saw a chapter on “myth” in the table of contents). In the second half of the book, he describes how the early church prioritized morning and evening prayer for all Christians, which evolved through monasticism into the elaborate and extremely lengthy daily office of the middle ages. This leads him to how Thomas Cranmer brought the daily office back to the laity in the Book of Common Prayer, so that Anglicans could be called a “people of the office.”

In This House of Brede by Rumer Godden

This novel set in an English Benedictine monastery follows the vocation of Philippa Talbert, a rising professional who leaves certain success in the world in order to take Benedictine vows. Folding her story within the life of her community, Godden weaves together the lives of the nuns as they seek to do the work of God, through personal and communal trials. Before you start it, you think, “This is about a monastery. It’s going to be a trudge.” But I found it a page-turner. Godden’s portrayal of the contemplative life is lively and relatable. This book, read along with English Spirituality and Company of Voices, formed a sort of trilogy for me in understanding the daily office and Benedictine life.

Revelations of Divine Love by Julian of Norwich

Thornton describes Julian of Norwich as the epitome of English Spirituality — her love and fidelity to the Scriptures, her holding together of the emotions and intellect, her sense of the “homeliness” of God’s love for us. I know that I will return to her writings many times in my life. I didn’t anticipate reading a medieval woman to receive of a sense of the super-abundant delight of God in us.

Advent: The Once and Future Coming of Jesus Christ by Fleming Rutledge

It was a steady joy this Advent to read this collection of writings and sermons by Fleming Rutledge. I felt, for the first time, that I had clarity on what Advent is really about — namely, the second coming of Christ. Rutledge’s immersion in the Scriptures, and her ability to help her readers/listeners understand them as vivid and immediate is inspiring. I finished the book on Christmas Eve with such gratitude for the grounding it gave me during December –a conflicting and difficult month for me.

Fertile Ground: A Pilgrimage Through Pregnancy by Laura S. Janssen

I’m due with our third little girl at the beginning of March and I always struggle a lot with pregnancy. This book (I received a review copy from Ancient Faith Press) has been a faithful guide to receiving pregnancy as a daughter of Mary — “behold, I am the Lord’s handmaiden” — and, as she says, “theology in motion.” Janssen’s Scriptural and theological depth, combined with her years of experience as a doula, make this book incredibly valuable. And, it’s beautifully written, too. I’ll be rereading it this January to write my full review on the Homely Hours and I’m looking forward to it.

The Country of the Pointed Firs by Sarah Orne Jewett

Oh, this was a gem of a book. Set in Maine, it’s an exemplar of regionalist writing. Though it’s loosely organized, the characters are living, vivid, and remain with you. It’s a quiet, perfect book. I think often of this quote from the earthy Mrs. Todd (and it’s a good representation of the simple loveliness of Jewett’s writing; she moves effortlessly between the refined voice of the narrator and New England dialect): “There’s sometimes a good hearty tree growin’ right out of the bare rock, out o’ some crack that just holds the roots,’ she went on to say, ‘right on the pitch o’ one ‘o them bare stony hills where you can’t seem to see a wheelbarrowful o’ good earth in a place, but that tree’ll keep a green top in the driest summer. You lay your ear down to the ground and you’ll hear a little stream runnin.’ Every such tree has got its own livin’ spring; there’s folk made to match ’em.’ “

My last two books on this list are novels that I reread this past year. Middlemarch by George Eliot was my favorite novel in high school. I reread it in my twenties and now my thirties and it has kept its place (it would be difficult now to name it my absolute favorite, but it’s definitely in my top three). I relate with Dorothea perhaps more than any character in fiction — ardent, taking herself too seriously, idealistic to a fault. I could discuss this book endlessly, but this time reading it in my thirties, I saw very clearly Eliot’s exploration of how youthful idealism works itself out — when are we failures? I took great hope again in her well-known conclusion, “The growing good of the world is partly dependent on unhistoric acts; and that things are not so ill with you and me as they might have been, is half owing to the number who lived faithfully a hidden life, and rest in unvisited tombs.”

I come back to rereading a novel by Jane Austen around every 4 or 5 novel. They are true companions and (indeed) friends. But this year, I decided (I think) that Persuasion is truly my favorite. Anne Eliot’s example of meekness and quiet strength is a lesson I keep in my heart. And — though this is a side note — I think often of how Anne repeats her favorite poems to herself, determined to not give way to despair while on the agonizing walk with her estranged, but still beloved Frederick and his present romantic interest Louisa. This example of a rich inner life has always made a strong impression on me.

With that, here are the other books I read in 2019 (offering some slight proof that I don’t only read British literature or books about English Spirituality):